Welcome to this slow cooker/crockpot blog. I believe slow cookers are the best thing to happen to modern day cooks. I used mine often when I worked outside the home and continue to do so even in retirement. It is so nice to put food on and forget about it. Slow cookers also allow us to cook many things we would normally have to use the oven for; what a relief in hot Texas weather! Some of these recipes are mine, many are ones I have collected over the years.

Brown the ground beef in a large skillet with the bell pepper, garlic and onion until the beef is no longer pink, stirring to break up beef; drain well.

Place lid on cooker and cook on low setting for 6 to 8 hours.

20 minutes before the end of the cooking time, prepare the macaroni according to the package directions; drain.  Pour the cooked macaroni into the slow cooker, replace lid, and cook until heated through.

To serve, garnish each serving with some of the cheddar cheese.
Yield: Approximately 3 1/2 quarts. 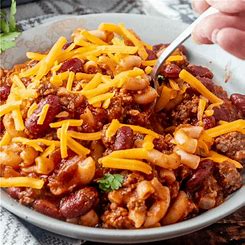 Stock photo for reference only.
Not this actual recipe.

Posted by Linda C Wilson at 8:34 AM No comments:

Email ThisBlogThis!Share to TwitterShare to FacebookShare to Pinterest
Labels: Chili

Melt butter in a large skillet; add apples and cook until tender. Stir in the Splenda products and cook until melted. Add the ketchup and cinnamon. Add the two types of beans, mixing well. Pour the mixture into a slow cooker or crockpot.

Place lid on cooker and cook on high 2 to 4 hours. 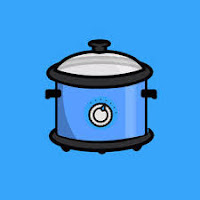 Place the onion, garlic, carrots, sweet potatoes, garbanzo beans, and chicken breast pieces into a slow cooker. In a bowl, mix the cumin, turmeric, cinnamon, black pepper, parsley, and salt, and sprinkle over the chicken and vegetables. Pour in the tomatoes, and stir to combine.

Place lid on the cooker, cook on high setting 4 to 5 hours or until the potatoes are tender and the mixture has thickened.

Note: The idea for this recipe came from allrecipes.com 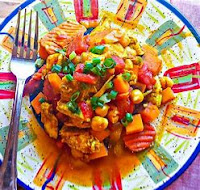 Posted by Linda C Wilson at 4:07 PM No comments:

Email ThisBlogThis!Share to TwitterShare to FacebookShare to Pinterest
Labels: Poultry

In a small bowl combine the pecans, brown sugar, flour, and 2 tablespoons of butter to form a crumbly mixture.  Sprinkle the mixture over the sweet potato mixture.  Place lid on cooker and cook on high setting 3 to 4 hours.

Note: I believe I got this recipe from Southern Living several years ago.

I don't eat chicken so I have never tasted this but others love it. I got it from the internet several years ago, from allrecipes I think.
4 large skinless, boneless chicken breast halves

For best results, after 6 hours of cooking, make another batch of the BBQ sauce, pour over shredded chicken and stir; cook another 1/2 hour until finished.
Posted by Linda C Wilson at 10:24 AM No comments:

Place the veggies in a slow cooker. Stir in the soup and spices, gradually stir in the water.

Posted by Linda C Wilson at 8:21 AM No comments:

This is a great recipe for anyone wanting to eat healthier in the new year!  If you don't want to use the beer, use 12-oz of low-sodium chicken broth or vegetable broth.

Spray a large nonstick skillet with the cooking spray and heat over medium-high heat.  Brown the meat, half at a time, in the skillet, turning to brown on all sides.  Transfer the meat to a 4-quart (at least) slow cooker or crock pot.

To the meat in the cooker add the broth, beer, and brown sugar; stir to combine.  Add the sweet potato, carrots, onions, turnip, and celery to the cooker.  Place lid on cooker and cook on low setting for 7 to 8 hours or half that time on high setting.  The meat and veggies should be just tender.  Stir in the zucchini and hominy. 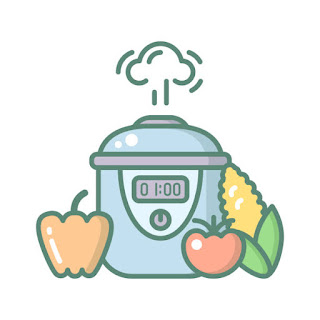 Email ThisBlogThis!Share to TwitterShare to FacebookShare to Pinterest
Labels: Pork, Soups and Stews

1/2 cup snipped dried tomatoes (do not use oil-packed)

In a slow cooker, place the carrots, turnip, tomatoes, onion, garlic, beef bouillon and spices. Place the meat over the vegetables and pour the water overall.

Place lid on cooker and cook on low heat for 8 to 10 hours or on high heat for 4 to 5 hours. Stir the beans and peas into the mixture. Let stand for 10 minutes.

Posted by Linda C Wilson at 8:44 AM No comments:

Email ThisBlogThis!Share to TwitterShare to FacebookShare to Pinterest
Labels: Beef

Brown meats together and drain well.

Lightly grease a crock pot or line with a liner. Transfer meat to the prepared crock pot. Add the ingredients from onion through parsley flakes and stir to mix.

Cook the noodles just until tender, drain and toss in the oil. Place in the crock pot and fold into the meat mixture. Cover and cook on low 6 to 8 hours or on high 3 to 4 hours.

Posted by Linda C Wilson at 1:10 PM No comments:

Email ThisBlogThis!Share to TwitterShare to FacebookShare to Pinterest
Labels: Pasta

Heat the oil in a large skillet; add the ground beef and onions, cooking and stirring until the meat is no longer pink.  Drain the mixture and place in a large slow cooker or crock pot.

Add the tomatoes, water, spices, green chilies, and the jalapeno pepper to the meat and onions.  Stir to blend well.

Cover and cook on high setting for 30 minutes.  Reduce heat to low and cook, stirring a couple of times, 4 to 6 hours.

Note: This is a file photo.
Posted by Linda C Wilson at 3:55 PM No comments: